Philip Ochieng: Kenyan editor and author who did it his way and inspired a generation

Philip Ochieng – who has died at the age of 83 – was a celebrated Kenyan editor, author and hard-hitting columnist who made his mark across East Africa. He was an East African par excellence who counted former Tanzanian president Benjamin Mkapa and revered Ugandan academic Mahmood Mamdani among his circle of friends.

Ochieng began his journalism career in 1966 when he joined the Nairobi-based Nation newspaper group, which was then only a few years old, at the invitation of then editor-in-chief George Githii. Within a year he was entrusted with a regular column debating the social, political and economic issues of a country that had gained independence from Britain only a few years earlier in 1963.

Mastering his environment in such a short space of time was typical of Ochieng. In Awendo, Migori County, close to Lake Victoria where he was born in 1938, his classmates remembered him as a genius who topped his class from the time he set foot in primary school. This fast-tracked him to the prestigious Alliance High School, a national school for high achievers near Nairobi.

Soon after he finished school, he joined the pre-independence airlift of young Kenyan students to the US. These students were being prepared to take over positions of leadership in anticipation of the country’s independence. The programme was organised by the former politician and trade unionist Tom Mboya and his colleague Julius Kiano.

In the US, Ochieng joined Roosevelt University but he did not complete his degree. He moved on to France and East Germany as well but he never graduated with a degree. On the eve of independence, Ochieng returned home, where he was employed as an English teacher in Migori. Later, he would be employed as a protocol officer in the ministry of External Affairs. While here, the letters he wrote to the editor of the Daily Nation caught the attention of Githii, who hired him as a cub reporter. This would mark the beginning of his life-long journey in journalism, which took him back and forth between Kenya, Tanzania and Uganda.

Ochieng emerged as a towering figure in the three East African countries. His brilliance was matched only by his willingness to mentor young journalists in the profession, many of them untrained as he had been. Wherever he worked, he helped many improve their writing skills through constant drilling – but also straight in your face memos delivered in his stern newsroom manner.

In the course of this, Ochieng wrote two books. The first, The Kenyatta Succession, was co-authored with fellow journalist the late Joseph Karimi. The second was I Accuse the Press: An Insider’s View of the Media and Politics in Africa.

But he was dogged by controversy in his early years. In 1970 he was forced to resign his Nation job after poking a colleague with the burning end of a cigarette.

He was then already being wooed by the Tanganyika Standard after President Julius Nyerere had nationalised it from its private owners, Lonrho. The Standard Tanzania, as it was first renamed, was merged with The Nationalist, a party newspaper belonging to the ruling Tanzania African National Union party. The title was later changed to Daily News in 1972.

Ochieng made his presence felt as soon as he arrived in Dar es Salaam, beginning a column weekly soon after. He resigned and left Tanzania in 1973.

After another stint at the Nation in Nairobi, Ochieng appointed the editor of the Sunday Times of Uganda in 1981. But it was short-lived. After only three weeks he was incarcerated after one of his sharp, take-no-prisoners pieces.

Upon release from the cells, he was hosted by his friend Mamdani, who arranged his flight out to East Germany.

Mamdani, who hosted him in Kampala after his release from prison in Uganda, told me of Ochieng’s contribution to journalism:

People who were literate and of age in the 1980s in Uganda certainly remember his role in Ugandan journalism and his writing. I have no doubt that Ochieng would have played a noteworthy role in advancing the cause of political journalism in Uganda had he been able to stay longer.

John Agunda, a Kenyan journalist who worked with Ochieng in Kenya for decades, remembers him too as the mentor of many.

He came across as a very meticulous and creative man and a workaholic. He was always at his typewriter either writing something to go into the following day’s paper or working on his manuscripts. He was also a very good teacher of up-and-coming journalists.

In the final years of his life – and with his poor health beginning to slow him down – Ochieng persisted in his love for teaching. His long running column, Mark My Word, was aimed at the general public as much as it was at journalists. 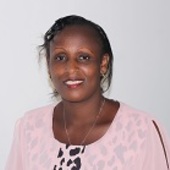