Nigeria has few women in politics: here’s why, and what to do about it

There are few women in political and leadership spaces in Nigeria. Currently only seven out of 109 senators and 22 of the 360 House of Representatives members are women. Ogechi Ekeanyanwu, from The Conversation Africa, asked Damilola Agbalojobi, political scientist and gender specialist, to explain the lack of representation, why it matters and how to remedy it.

Why are women so poorly represented in leadership positions?

There are multiple factors. Some are related to the political party systems and structures. For instance, the high cost of politics prevents women from standing for positions. Often women don’t have enough money to pay for the mandatory expression of interest and nomination forms required by political parties to run for positions on their platforms. In addition, election campaign costs are exorbitant. So poor access to education means poor access to gainful employment. Unpaid labour burdens, unequal inheritance rights and outright discrimination also mean that women are less likely to be able to afford to follow through the process of getting leadership positions.

There are also societal factors that impede women’s representation. They include cultural or religious norms surrounding marriage, indigeneship – a concept that recognises only ethnic groups native to a particular state – and the structures that portray women as subordinate to men.

Even educated women face hindrances. They encounter gender stereotypes that assign leadership to men, sexual assault, pay gaps and unpaid labour, including child care and housework, placing them at a disadvantage.

There is also a lack of political will and effective government action.

The media give poor coverage to female candidates. It’s not the same as the coverage men get. Women candidates are often subjected to gender related electoral violence, threats and hate speech because of the perception that women want to get what is traditionally men’s.

Why is representation of women in politics important?

As about half of the population are women, their participation will create a balance of power between genders. This is an indicator of development in any society. Over the years, I’ve witnessed a rise in the number of women serving in elected and appointed political position, the world over. But that is not the case for Nigerian women.

The full and equitable participation of women in public life is essential to building and sustaining strong, vibrant democracies. When women are not participating in politics, it’s less likely that policies will benefit them. Women need to participate to bring attention to issues that uniquely affect them, and to change attitudes towards gender.

Why have attempts to get more women into leadership positions failed?

Policies, protocols, conventions and quota systems are rooted in the concept of compensatory justice: compensating specific individuals who were wronged or marginalised. But there are polarising reactions to affirmative action.

Some people argue that it is a systematic way of achieving both equality and reparation, without force. Others feel it undermines the democratic concept of equality of opportunity and argue that women should be given a chance to compete equally with men. These polarising schools of thought limit the efficiency of protocols, conventions and quota systems as ways to get women into leadership.

Also, customary laws often clash with the goals of protocols and conventions.

Countries like Rwanda and South Africa have used a quota system to pave the way for women representation in politics. In Rwanda, over 50% of political positions are held by women. Affirmative action or a quota system provides role models. Seeing women in positions of power can encourage others to confidently aspire to leadership positions.

Affirmative action also promotes diversity and increases opportunities for a disadvantaged group. It can decrease the potential for conflict as members of society begin to find themselves at the same level, politically, economically and socially.

How can the problem of representation be solved?

First, training is crucial. Women need training in the fundamentals of politics. They need to understand grassroot politics and start from there. When people are unknown at the grassroots, they aren’t successful.

Another way is networking and mentoring. Women also need to see that politics is not all dirty. They need to see governance as what affects every member of a society.

Legislative changes are needed too and that is where affirmative action comes in. A quota system that reserves a fraction of electoral positions for women can be legislated.

Financial support is crucial. Some women can’t afford to buy party forms. And when payment for forms is waived for women, they are often made to step down for the man who has paid. Women need financial support that will not impede on their rights to participate or vie for positions.

Women must also ensure that only women who are efficient and have the capacity to lead are encouraged to vie for positions.

The media must change their attitude towards political coverage of women. They sometimes project women in ways that are not relevant to leadership, politics or election. The media must help educate people of the dangers of cultural norms and harmful gender stereotypes, and monitor fairness in elections. There are cases where election violence has badly and specifically affected women. The media have to report these and hold perpetrators accountable.

Advocating for affirmative action at the state and political party level is also important. Political parties have been known to tell a woman to step down from the electoral process. This must stop. 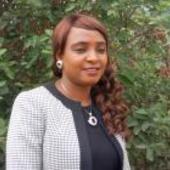